“ I totally agree! The performance is excellent! And your favorite actors are just on top!

Elena was 24 june on My wife's husband

“ Were with my girlfriend. Very pleased, very satisfied! They laughed heartily, thank you very much!

Natal`ya was 24 june on My wife's husband

“ My friend and I went to this performance on August 18. Amazing actors play! It was a real holiday! Thank you so much!!! 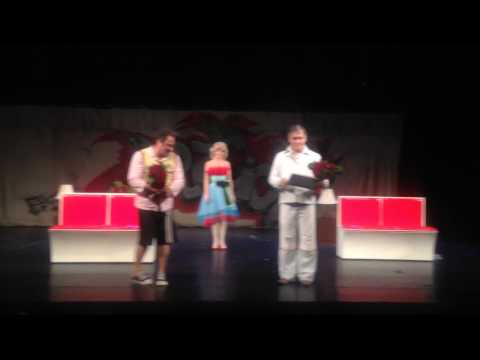 Charming Dragutsy works as a conductor. Day in one city, night - moving, day in another city, moving - so for many years her life is strictly subordinated to the long-distance train schedule. And otherwise it is already impossible, because the profession has left a mark on her personal life.
Somehow by itself at both points of the train at the Draghi, families were formed. Now in one city she is married to the economic Kresh, who with trembling and tenderness prepares her the most exquisite dishes, and in the other - for the hard-working Zhakretsem, with whom the daughter is raised in joy.
A well-organized life, wonderful work and loving husbands - well, what else can a woman dream about!
But if the train does not get out of the schedule ...
Read more

"A man who has been under the heel, is able to endure any hairpin."

Even the news that his wife has a second husband.

She works as a conductor of a long-distance train. And for many years running from one city to another. The schedule does not change. In one of them she has a caring husband and daughter. In the other, another husband.

The men got courage and decided to meet with each other. How long will this continue? She must stay with someone else!

But they are so different ... One is breathtakingly elegant, prepares her delicious food. The other is a real man who does not tolerate tears, sobs and sighs. If only it did not come to a fight!

They will remember it all! The intriguer finds out what they think of her. How could they be so humiliated? So many years of being so cunning and deceiving!

But the clever and wise woman will reconcile them. She will be helped by an amazing sense of humor.

An incisive comedy with funny jokes and jokes.

The strength of a woman is in her weakness.

“ I totally agree! The performance is excellent! And your favorite actors are just on top!

“ Were with my girlfriend. Very pleased, very satisfied! They laughed heartily, thank you very much!

“ My friend and I went to this performance on August 18. Amazing actors play! It was a real holiday! Thank you so much!!!

According to statistics and audience who have bought a ticket for«My wife's husband», we recommend to see