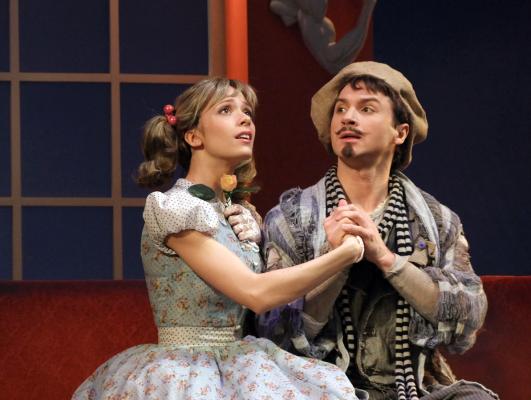 from 800 rubles
Feedbacks: 94
"There was a man and zipper ..." I had to become a lady.
A young Parisian artist is barely making ends meet. His neighbors in Montmartre are also poor. Nobody takes pictures of beginners.
One of the friends came to the idea - they are buying the works of dead masters well. Especially if you come up with a beautiful legend about the deceased.
No sooner said than done. The choice fell on Francois. He was declared sick, and then he died tragically. Francois shaved his mustache and became inconsolable Daisy, a widow, a sister of his own to the deceased talent.
Funeral without the time of the late master of landscapes was arranged with pomp. To the painter who suddenly became famous, the sheikh, the sultan and the English queen came to pay the last debt.
François is not easy. Not only that it is necessary to walk in women's outfits and on heels. He also fights off the annoying and mercenary masters.
Three restless friends, a Dutchman, an American and an Irishman, fill the price of the works of the deceased maestro.
Songs, dances, jokes, bullshit. Excuse me, are you going to the funeral? It's not wedding fun!
How to know! It will not be the same Daisy for the rest of his life to mourn over his brother. While the goal is different - to achieve wealth and glory.
"The rumors of my death were greatly exaggerated." 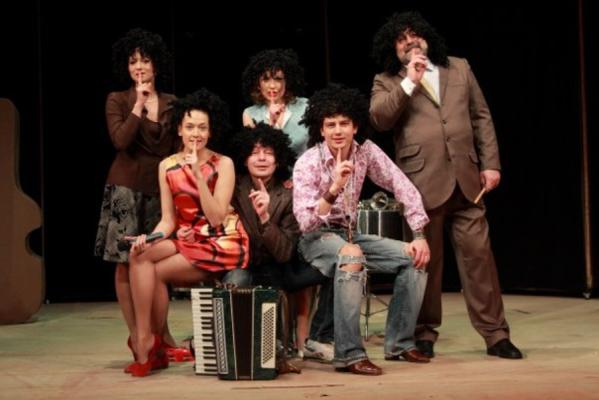 The lyric comedy of Mark-Gilbert Sauvageon, of course, tells of love! After all, who can know and understand love better than the French?

The daughter of a millionaire fell in love with a man ... not the most rich, but charming and, undoubtedly, worthy of love! And what does her very wealthy father think about this? And the girl of her lover how will she behave?

Yes, there, where it comes to the love affair, many people are involved and somehow involved in the relationship of lovers.

For example, it suddenly turns out that the father of a young man worked as a subordinate to a girl, the daughter of a millionaire. And the girl's father fired her lover's father ...

So whose love will win and whether love in the world, where money means so much, will win? .. 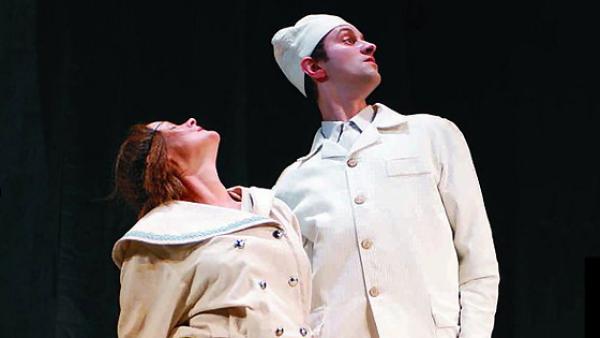 What kind of Beautiful Lady wrote in his poems Alexander Blok?

Andrew White at the request of Valery Bryusov decided to find out. Poets of the Silver Age will meet in Shakhmatovo, Blok's estate.

Creative people can not fail. They are so young, so talented! Life does not interest them, even oppresses them. Ridiculous, funny, awkward ... They wanted to play games.

The difficult task is to become a centaur. But they will get to gallop.

The raft one dresses up in the bright costume of the merry Harlequin, and the other - the sad Pierrot.

Would the Beautiful Lady, Mendeleev's daughter, become Malvina? Or they will find another performer of this role?

Irony or farce? It seems that the immortal images of Daniil Kharms come to life.

A historical anecdote about the friendship of two great poets. 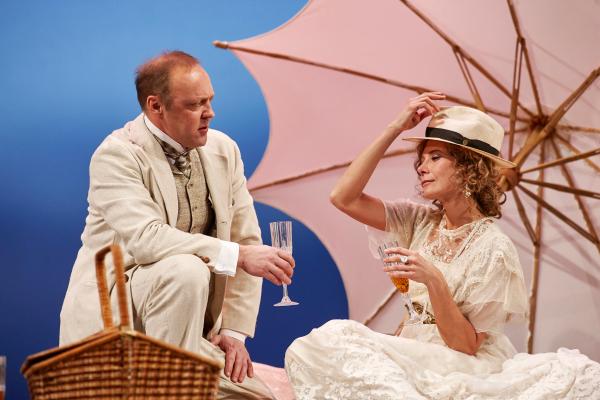 The last coin of his past lives out.

A noble house, a beautiful garden. How good it is here in the spring, when the cherry blossoms!

Now the garden is partially cut down, the villas will be built. Everything is sold, lost.

The new master is happy: his father and on the threshold of such a noble house were not allowed, but now he owns all the property. But also unhappy too: how would he like that this light beauty does not go away so that the former owner of the garden does not leave so that the blooming of the beautiful garden continues like a beautiful fairy tale ... like a dream of that paradise of a carefree noble life in which people do not think about deeds, Trading, money. 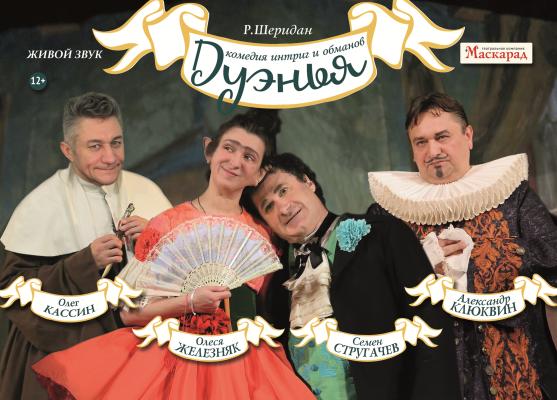 Luis, the young bride, is very pretty, but not for the beauty chose her fiancé: he marries money, and most important for him is the dowry that the bride's father promised. And Luis is in love with another ... How to be?

The resourceful duenna, the girl's teacher, will come to the rescue. She will change outfits with attire and give herself out for Louis. Here the merchant will sit in a puddle: marrying a duenier instead of Luis ... And the duenna will turn from a simple educator into a rich married woman. And Luis herself will marry out of love for Dona Antonio! Yes, and parents eventually with such a turn of affairs will reconcile, in fact for them it is most important that the daughter was happy, and money - business acquired! 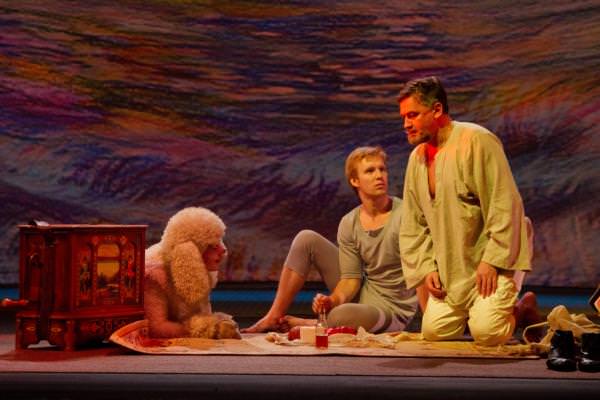 You are responsible for those who have tamed.

A good person will not abandon a friend in need, even a dog.

Poor artists, grandfather and his grandson give short presentations to the rich inhabitants of the Crimean dachas. The old man once took a little boy to be brought up by a drinking cobbler.

But they are thrown very little money, sometimes even a trained poodle has nothing to feed. They have no other income.

Funny tricks and jumps through the hoop of a white fluffy dog ​​are rejoiced by rich children in fancy suits on their shoulders. And the old man twists an ancient barrel organ that plays a dull German waltz.

One day a boy ran out of a luxurious house, tried by parents and servants. But he was capricious, and then he wanted to see a street performance with a poodle.

The dog liked the barchuk so much that he asked his mother to buy it. Stamping with your feet!

The artists gave up a lot of money. Soon a messenger from that family came to them and once again asked to sell the poodle. I was upset that I did not persuade my grandfather and the boy.

And then the poodle disappeared. Will a disconsolate boy find a four-legged friend? 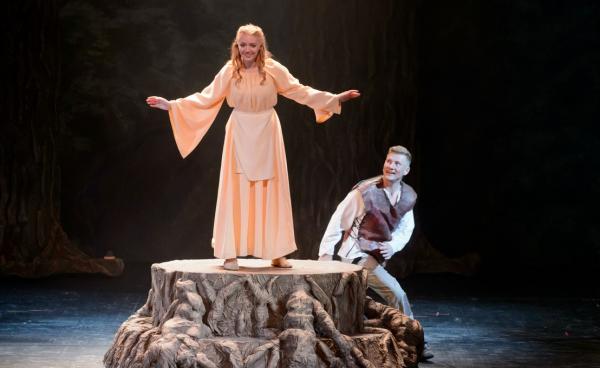 from 400 rubles
Feedbacks: 134
Found a treasure, but lost himself. Expensive only that has no price.

Poor coal collar Peter dreams of big money, which will give him power over people. For the sake of them he is ready for anything. Even go to the dense forest to the terrible sorcerer and gigante.

The wicked sorcerer Michel offered him wealth in exchange for a living heart. This evil giant has many hearts of rich people. In return, Stupid Peter received a heart of stone and a lot of gold coins.

A wise glass man, a kind wizard, discouraged Peter from making a deal with the giant. The sorcerer is always ready to deceive the common man.

He told him that the kindness and love of loved ones is much more important than wealth. Advised to work honestly and be satisfied with the small.

After the meeting with the sorcerer, Peter's whole life changed. He became cruel and mercenary. He lost all his friends. Even struck his wife Lisbeth, when she handed a piece of bread to a poor beggar. He did not know that it was the Glass Man.

Peter's wife disappeared from his life. He wanted to return her.

A brave coal miner fought with a giant, defeated him and got his warm heart back. Only then Lisbeth forgave him and returned home.

The real treasure is a good heart. 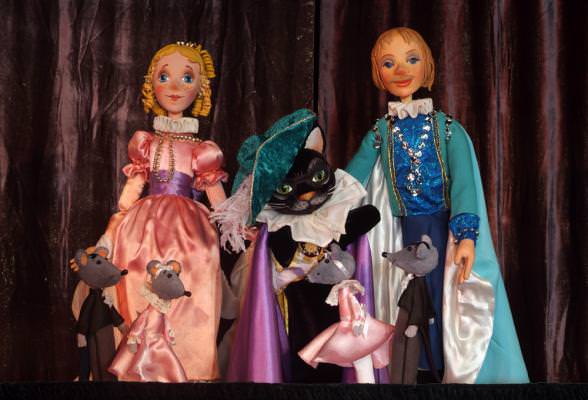 Who's in the boots?

from 900 rubles
Feedbacks: 24
This cat is a mod and a dandy! Look at him, he's dressed as a real marquise!

And yet, did not he deserve his mustache? He helped his master a lot: he was the owner of the miller's simple son, but became a rich man, a prominent man. Hence, his cat is also a noble family from now on!

An instructive tale is played out to the music of Mozart. The costumes are beautiful, the dolls are adorable, and the most charming, of course, is the one with the tail, the mustache, the green eyes, and the boots-everything is there! 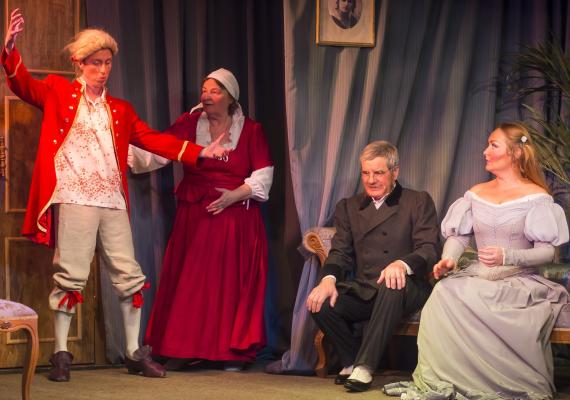 She was faithful in her infidelity.

In each provincial capital dies. What a faded life in the province. And the further for mkad, the paler.

Maybe that's why they come? At least somehow color your world. Let the transition, but "Chanel". Shines, bright, rich. What else is needed?

In pursuit of a better life, she goes to treason. Especially reason is such. The guest himself appears on the threshold and, almost with a run, into her bed. Yes, the guest is not from somewhere, but from the capital.

Urban accent and memories from the past cast aside the last doubts. If you go, then go to the end.

Household and handicrafts are not for her. I put it in the backwoods.

A husband can not - she can. Does she have to stay here forever? The need will teach everything. A new lover will help you move to the capital.

And what about the husband? Where does the husband look? On the dizzying success of his little wife. Confused, but looking.

Morality is nothing. Social status is everything. 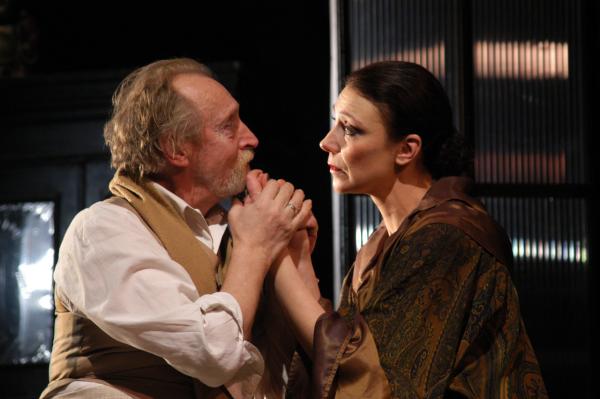 "You can tell by eyes whether a person has money or not."

Zoe has a special scent for money. He knows everything at all costs and will not give himself up for offense.

She dreamed of making a lot, and then going to Paris. She saw this city only in a dream.

And in the Soviet Moscow of the thirties, the ladies do not live sweetly. Beautiful outfits in the afternoon with fire do not get - you can only sew.

So Zoya conceived in her cozy apartment to open a sewing workshop for sewing fashionable dresses and working clothes for the proletariat.

But this is for a diversion of eyes. A lot of money will be brought to her by the visiting house. And her assistants are one better than the other - a charming rascal and a former lover.

She organizes cheerful parties with them.

Scammers are always there. They reported to whom it follows that Zoya is a "socially dangerous type". Caring is full of mouth.

But trouble does not come alone. She's got a commercial director killed in her apartment!

Now she can not escape arrest. I cried her apartment! 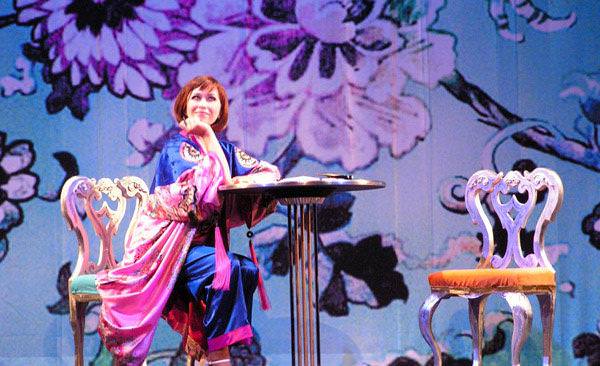 The Barber of Seville

Opera G. Rossini is based on the same comedy by P. Beaumarchais.

A funny story happened in the XVIII century in Seville!

Dr. Bartolo dreams of marrying his girlfriend Rosina. He does not admit anyone to his house and especially persistently drives the singing Rosina serenade of Almaviva. But Count Almaviva is not so simple: on the advice of his new friend, the barber of Figaro, the Count disguises himself and enters the house of Bartolo as a lodger.

And even if Dr. Bartolo is always on the alert, vigilantly watching Rosina, he will surely miss the moment when Almaviva and Rosina, these two lovers, secretly get married! ..

And all of Figaro, this great dodger and intriguer, turned the wedding, brought the lovers together! 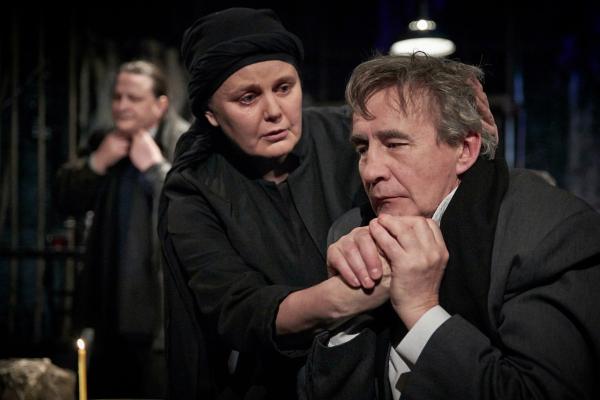 The Last Temptation of the Apostles

Do not believe your eyes, they lie. Only faith will reveal the truth.

When there is little faith in the heart, many prejudices are born. And then they appear - our enemies.

A man has many enemies. Despair, boredom, anger. But our most terrible enemy is doubt. Because of him, we lose everything. Missing something very important that they could get.

One of the busiest nights in history. The night before the Resurrection. The most terrible happened - Christ crucified.

What awaits all ahead? How can one believe that a resurrected person is a Teacher? To gain true faith, one must take this one painful step. A step from fear to faith.

Where to get the strength for this?

How to believe in a miracle and us? Modern people, mired in a world of war and cruelty, where everything wonderful perishes at the root.

Can we still love without a doubt?

Even if you do not believe God, he believes in you.