2 Feedbacks
Feedbacks from viewers
Nataliya was 25 february on OPERAINERS

“ Hard performance, which reflects the unsightly reality, deepened by the bright play of actors. Maxim Averin at the height of temperament, challenge and tragedy! 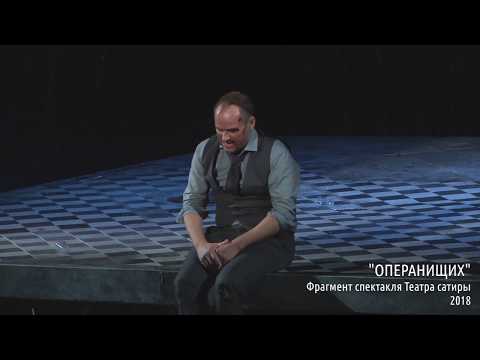 Andrey Prikotenko
Based on the play “The Opera of the Poor” by John Gay
Andrei Prikotenko, director of the play: - I put a variation on the plot of the famous
plays by John Gay, his action moved to modernity. I want to
the play spoke of our days: heavy, harsh, and sometimes scary. it
a rather tough performance in which a strong tragic utterance sounds
on the topic of human loneliness in the modern world. I completely rewrote the play.
Ivan Kushnir wrote the music. Viewers should understand that “Beggars' Opera” is not
entertaining performance. He will make empathize the heroes, perhaps, will be something
something to disturb, to disturb. For the Theater of Satire, in my opinion, this is unusual
staging. I may venture to say that there has never been such a theater in this theater.
sound, such sharpness, modernity and tragedy.
Production: Andrey Prikotenko
Scenography and costumes: Olga Shaishmelashvili
Composer: Ivan Kushnir
Conductor: Andrei Rubtsov
Lighting Designer: Igor Fomin
Video Artists: Oleg Mikhailov, Konstantin Shchepanovsky
Cast:
Maxim Mikhailovich Korneev, nicknamed Max - Maxim Averin
Viktor Ilyich, nicknamed Topor - Yuri Vorobyev
Fields, daughter of Ax - Svetlana Malyukova
Grisha, Ax driver - Yevgeny Khazov
Masha - Svetlana Ryabova
Seryozha, programmer - Sergey Kolpovsky
Boria, head of the 52 police station - Alexander Chevychelov
Lucy, his daughter - Love Goat
Valera named Boiler - Valery Guriev
Pasha named Paste - Pavel Misailov
Read more

“ Hard performance, which reflects the unsightly reality, deepened by the bright play of actors. Maxim Averin at the height of temperament, challenge and tragedy!

According to statistics and audience who have bought a ticket for«OPERAINERS», we recommend to see